A Hair Trigger on Endgame

A Hair Trigger on Endgame

Dear Readers:  The insouciance of Washington and its European puppets toward the dangerous situation they are provoking with Russia is frightening.  The Western world is now led by people who have made it clear that they will risk nuclear war in their pursuit of American hegemony.  Evil has clearly triumphed in the Western world.

We are now on the brink of a nuclear holocaust.  One false warning of nuclear attack, believed to be true, could cause Russia to launch a full-scale nuclear attack against the US and Europe.

False warning signals indicating incoming nuclear weapons have happened before, but were discounted because a sufficient level of mutual trust had been achieved. Now, with two decades of reckless provocations of Russia, with missile bases being constructed on Russia’s borders in Poland and Romania, with US/NATO fully committed to defeat Russia in Ukraine, and with massive anti-Russian propaganda in place of diplomatic negotiation, trust has been destroyed.  Notice the provocative idiocy of US Secretary of Defense Lloyd Austin who mischaracterizes Putin’s warning about the extremely dangerous situation as “Russian saber-rattling.”  With utter fools like Austin making decisions, there is a zero chance of avoiding Armageddon.  Lloyd’s position is that it is Putin who must avoid provocative behavior, not Washington.

The expressed willingness of Finland, Sweden, Poland, and Romania to accept US nuclear weapons in their countries, together with the ability of the US to launch against Russia from the Black and Baltic seas, greatly heightens anxiety in Russia.  Unlike the Cold War period, in the 21st century Washington has worked overtime to destroy all trust.  Consequently, one more false warning is all it takes to exterminate mankind.
We are on the brink of nuclear war, and we do not have a John F Kennedy in the White House to stop it. Instead, we have insane neoconservatives committed to US hegemony at all cost.
Putin said:

Russia’s nuclear doctrine is based on the “launch on warning” concept, which envisions nuclear weapons’ use in the face of an imminent nuclear attack spotted by its early warning systems.

“When the early warning system receives a signal about a missile attack, we launch hundreds of missiles that are impossible to stop,” he said, smiling. “Enemy missile warheads would inevitably reach the territory of the Russian Federation. But nothing would be left of the enemy too, because it’s impossible to intercept hundreds of missiles. And this, of course, is a factor of deterrence.” 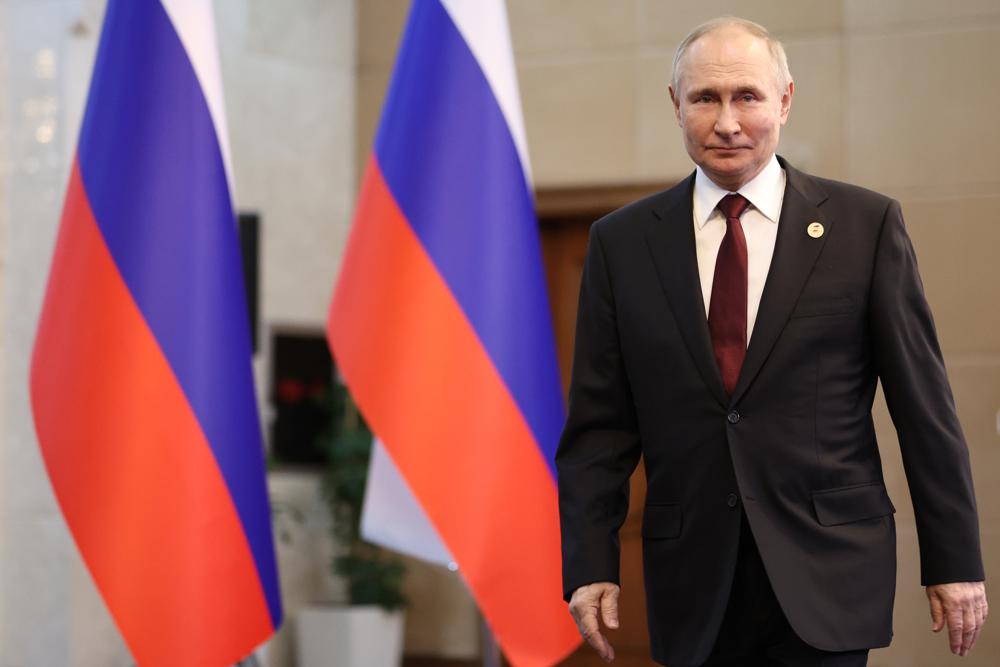 Russian President Vladimir Putin arrives at his news conference after the Summit of the Intergovernmental Council of the Eurasian Economic Union (EAEU) in Bishkek, Kyrgyzstan, Friday, Dec. 9, 2022. (Sergei Bobylev, Sputnik, Kremlin Pool Photo via AP)
MOSCOW (AP) — Russian President Vladimir Putin said Friday that Moscow could adopt what he described as a U.S. concept of using preemptive military strikes, noting it has the weapons to do the job, in a blunt statement amid rising Russia-NATO tensions over Ukraine.

“We are just thinking about it. They weren’t shy to openly talk about it during the past years,” Putin said, referring to the U.S. policy, as he attended a summit in Kyrgyzstan of a Moscow-dominated economic alliance of ex-Soviet nations.

For years, the Kremlin has expressed concern about U.S. efforts to develop the so-called Conventional Prompt Global Strike capability that envisions hitting an adversary’s strategic targets with precision-guided conventional weapons anywhere in the world within one hour.

“Speaking about a disarming strike, maybe it’s worth thinking about adopting the ideas developed by our U.S. counterparts, their ideas of ensuring their security,” Putin said with a thin smile, noting that such a preemptive strike was intended to knock out command facilities.

While Putin appeared to refer to conventional precision-guided weapons when he talked about possibly mimicking the U.S. strategy, he specifically noted that the U.S. hasn’t ruled out the first use of nuclear weapons.

“If the potential adversary believes that it can use the theory of a preemptive strike and we don’t, it makes us think about the threats posed by such ideas in other countries’ defensive posture,” he said.

In Washington, advisers to President Joe Biden viewed Putin’s comments as “saber-rattling” and another veiled warning that he could deploy a tactical nuclear weapon, according to a U.S. official who was not authorized to comment and spoke on the condition of the anonymity.

The official noted that Russian military doctrine has long stated that Moscow reserves the right to first use of a nuclear weapon in response to large scale military aggression.

John Erath, senior policy director for the Center for Arms Control and Non-Proliferation, also viewed Putin’s statement as yet another attempt to raise the nuclear threat.

“He doesn’t quite say we’re going to launch nuclear weapons, but he wants the dialogue in the U.S. and Europe to be, ’The longer this war goes on, the greater the threat of nuclear weapons might be used,’” Erath said.

Putin was asked Wednesday at a Kremlin conference whether Russia could commit to forswearing a first strike and responded that such an obligation might prevent Russia from tapping its nuclear arsenal even if it came under a nuclear attack.

“If it doesn’t use it first under any circumstances, it means that it won’t be the second to use it either, because the possibility of using it in case of a nuclear strike on our territory will be sharply limited,” he responded.

He elaborated on that answer Friday, saying Russia’s nuclear doctrine is based on the “launch on warning” concept, which envisions nuclear weapons’ use in the face of an imminent nuclear attack spotted by its early warning systems.

“When the early warning system receives a signal about a missile attack, we launch hundreds of missiles that are impossible to stop,” he said, smiling. “Enemy missile warheads would inevitably reach the territory of the Russian Federation. But nothing would be left of the enemy too, because it’s impossible to intercept hundreds of missiles. And this, of course, is a factor of deterrence.”

Russia’s nuclear doctrine states the country can use nuclear weapons if it comes under a nuclear strike or if it faces an attack with conventional weapons that threatens “the very existence” of the Russian state.

Since sending Russian troops into Ukraine in February, Putin has repeatedly said that Moscow was ready to use “all available means” to protect its territory and has rejected Western criticism of nuclear saber-rattling.

“I understand that ever since nuclear weapons, the weapons of mass destruction have appeared, all people — the entirety of humankind — have been worried what will happen to the planet and all of us,” he said.

“As the Kremlin continues its cruel and unprovoked war of choice against Ukraine, the whole world has seen Putin engage in deeply irresponsible nuclear saber-rattling,” he said in a reference to Putin’s earlier nuclear threats without addressing his latest remarks. “So make no mistake, nuclear powers have a profound responsibility to avoid provocative behavior and to lower the risk of proliferation and to prevent escalation and nuclear war.”